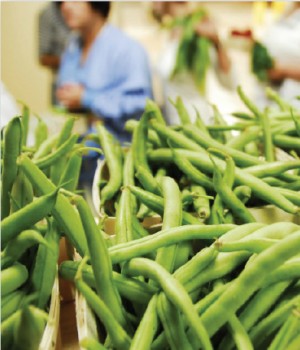 Published in the March 2017 issue of Today’s Hospitalist

WHILE A GROWING NUMBER of hospitals host farmers’ markets on their campuses, facilities in the Northeast and Midwest have months to wait for fresh, local produce. But St. Joseph Mercy Ann Arbor, a hospital in Ypsilanti, Mich., has found an innovative solution to keep its weekly farmers’ market open year-round.

The market, which is held in the hospital lobby, gets its produce from the onsite Farm at St. Joe’s, which now covers 25 acres of what used to be hospital lawn. To remain productive during the winter, the farm has three 30-by-95-foot hoop-houses.

While a local farmer tills much of those 25 acres for hay, the farm—which was started with four acres in 2010—has become an integral part of the hospital campus.

Its CSA (community supported agriculture) program, for instance, is open to the staff and the public with produce distributed seven months a year. That has been a real boon for the center’s physicians, says Lee Benjamin, MD, an emergency physician and pediatrician who serves on St. Joseph’s wellness committee.

“Working doctors tend to not live the healthiest lifestyles in the hospital,” Dr. Benjamin points out. “We’re very busy, we work odd hours, and we tend to eat and sleep only when we can.

Being able to pick produce up right here is one way we can tie the campus and farm into the day-to-day behavior of the doctors and the medical staff.”

The farm last year also hosted more than 1,000 students as part of its community education program. (In October, 350 students attended a one-day service day where they learned about the crops and helped maintain the nature and jogging trails.) One of the hoop-houses is handicap-accessible and is used in warmer months by brain injury patients from the Eisenhower Center, which is located only a few miles away.

While some farm produce ends up in the hospital cafeteria and even in patient meals, most goes to the farmers’ market and CSA, with surplus donated to a local food bank. Farm project manager Amanda Sweetman has given cooking demos at a local clinic during the weekly produce distribution, and she’s holding discussions with the nursing home on campus to start a garden club at the farm for its residents.

In addition to being a great place to visit, Dr. Benjamin says the farm helps the hospital present a comprehensive model of wellness and prevention that goes beyond being able to care for sick patients.

“It sends a powerful message to the community about the importance of nutrition in maintaining health and wellness,” says Dr. Benjamin. “That’s where the farm fits in.”

Turning a hospital lawn into a working farm “sends a message to the community” about nutrition, wellness and prevention. More information is online.