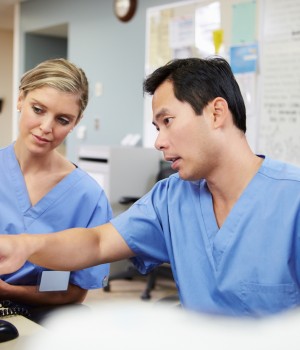 BEFORE CLINICIANS can treat patients for sepsis, they have to be able to recognize the condition. That, it turns out, is much easier said than done, because many providers—especially if they don’t regularly care for critically ill patients—think they are better at recognizing sepsis than they really are.

But what if you could use your EMR to ﬂag when patients are getting sicker in real time? That’s just the kind of early warning system that hospitalists Kencee Graves, MD, and Devin Horton, MD, helped create at Salt Lake City’s University of Utah. Moreover, one of the simplest parts of that system—colorand numeral-coding—has turned out to be one of its most powerful elements.

“We walked past the nurses’ station one day and overheard some nursing aides,” Dr. Horton says. “They were saying, ‘My patient is a 4, and I don’t want her to get to 5.’ They really follow the number and, as a result, probably give those patients more frequent care.” The doctors hope that extra care will help prevent some septic patients from developing severe sepsis or even shock.

“You can motivate people better with something that has actually happened than just with data.”

“Everybody who is looking at a patient list,” adds Dr. Graves, “can know whose vital signs are most abnormal at any given time.”

Big knowledge gaps
Drs. Horton and Graves knew they had to do something to help providers with earlier sepsis recognition. They had surveyed physicians, residents and nurses at the University of Utah to see if clinicians could identify patients with sepsis, severe sepsis or septic shock, based on clinical vignettes. The results showed “true knowledge deﬁcit,” Dr. Graves says.

“We all think we are doing a good job when it comes to this,” says Dr. Graves. But as Dr. Horton points out, “even if doctors can identify 70% of patients with sepsis or severe sepsis, they are missing 30%. The mortality of severe sepsis is too high to rely on inconsistent provider knowledge.”

In addition to administering surveys, they and their residents retrospectively reviewed the charts of 200 patients with sepsis to determine how long it took for someone meeting sepsis criteria to receive initial doses of antibiotics. When they went to sell their early warning alert system to their colleagues, they had real-world anecdotes they could share based on that review.

“That made it very personal, rather than us just saying, ‘this is important,'” says Dr. Graves. “We could say, ‘Patient X had unrecognized sepsis and died of shock 30 hours later.’ You can motivate people better with something that has actually happened than just with data.”

In addition, Dr. Horton says, big-picture data from the hospital’s quality experts showed that among patients who died in their hospital, “43% were coded with sepsis at the time of their death.”

Education alone doesn’t last
But national research shows how difficult it can be to affect long-lasting change though education alone. Drs. Graves and Horton knew they likely needed more than just training to improve their sepsis mortality rate.

In fact, following their own “robust” educational push, nurses “dramatically improved” their recognition rates from “very, very low,” Dr. Horton notes. But physicians tested on the vignettes did not improve at all. (He and Dr. Graves are in the process of writing that research up for publication.)

And because sepsis can affect all patients, every provider working on any service or ward needs to be targeted by any educational push designed to improve sepsis care. Not only is that time- and resource-intensive, but it may not even be realistic. As Dr. Horton explains, “Surgical subspecialty residents are probably never going to get to 100% sepsis recognition rate, as they have other advanced procedures to focus on.”

That’s when the need for a systems intervention— like an EHR-based alert system—became obvious. But the physicians were also acutely aware that any warning system had to produce few, if any, false alarms.

“We knew the second providers started feeling alert fatigue, we would lose the battle before it even started,” says Dr. Horton. “We wanted to ensure that when our docs arrive” at the bedside, “they were grateful that they were called and not frustrated with us” for sending them a false alarm.

When it comes to sepsis, however, avoiding alert fatigue can be tough. That’s because the most accepted way to identify decompensating patients is with SIRS criteria . Because those criteria are notorious for not being very speciﬁc, Drs. Graves and Horton instead decided to use a Modiﬁed Early Warning System (MEWS) aggregate scoring system.

How it works
Starting last year, the Epic EMR screen that lists all patients—and can be seen by any provider in the hospital—now displays a column labeled “MEWS total score.” That score, which Dr. Horton says is “more speciﬁc and less sensitive” than SIRS-based systems, reﬂects worsening degrees of abnormal vital signs.

In-house technology was added to the Epic system to automatically calculate and update the MEWS score in the EMR whenever a patient’s vitals are collected. Patients with a score between one and four display as green, while ﬁve through seven are yellow, and eight is red.

Now, if a nurse or nursing assistant enters any one abnormal vital sign, the warning system ﬁ res an alert to prompt nurses to enter a full set of vitals. When a MEWS score hits the yellow zone, the EMR automatically pages the charge nurse, who is responsible for calling the physician if necessary.

When doctors enter the chart and if infection is likely, they are directed to an order set to choose a site of infection and enter labs and antibiotics predetermined by the infectious disease department. At the same time, the bedside nurse is directed to an order set that includes both STAT and four-hour repeats of lactic acid tests and blood cultures, as well as more frequent vital signs.

And if the MEWS score reaches the red zone, both the charge nurse and a rapid response team are paged to evaluate the patient, draw labs and consider a transfer to the ICU, if clinically indicated.

Drs. Horton and Graves presented an abstract about the alert system at this year’s Society of Hospital Medicine annual meeting. That abstract concluded that the system helped patients “receive treatment more quickly.” The warning system has now been rolled out throughout the hospital.

“Developing our project was difficult and time-consuming because it was about buy-in and change management” as much as about EMR-based alerts, says Dr. Graves. The “education was our tool for culture change. Alone, educating people doesn’t last, but helping people understand why they should care about this gave us a big boost.”

I like how you mentioned that many health providers think they are better at recognizing sepsis than they really are. I think anything we can do to improve sepsis detection rates is something worth pursuing. With luck, I think researchers and doctors can really help people suffering from this.