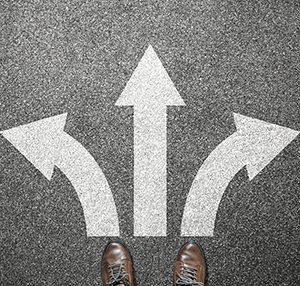 A SCARY NUMBER of patients lack decision-making capacity. In a systematic review published in the July 27, 2011, Journal of the American Medical Association, Laura Sessums, MD, JD, and her colleagues looked at the prevalence of incapacity in various populations. Among “medicine inpatients,” they found that a whopping 26% didn’t have the capacity to make decisions.

What’s even scarier is how seldom capacity crosses our minds. It usually takes something like delirium, severe dementia or intubation to sound the capacity alarm. But fully a quarter of your census—including pleasant, cooperative patients—probably shouldn’t be making their own medical decisions, at least while they’re in the hospital.

Informed consent
Capacity is imbedded in the doctrine of informed consent, one of a triad of factors that also includes disclosure and voluntariness. Disclosure involves discussing the risks and benefits of available tests and treatments, including of declining care. Voluntariness means the patient’s decision isn’t being forced or coerced by others. All three—capacity, disclosure, voluntariness—must be present to meet ethical and legal muster.

Fully a quarter of your census probably shouldn’t be making their own medical decisions.

Capacity, in turn, consists of four criteria. To have capacity, patients must demonstrate the following:

• understanding of their situation and care options;
• appreciation of how information presented applies to their situation;
• reasoning consistent with their goals, preferences and values; and
• ability to communicate a choice.

Consider your average surgical consent form. The surgeon has dutifully met the disclosure requirement— bleeding, infection, anesthesia complications—but it’s far from clear that the patient’s signature represents capacity and absence of coercion. I’ve joked for years that I don’t believe half of the consents that I find in charts.

Recognizing incapacity
Patients are presumed to have capacity unless demonstrated otherwise. That’s OK in low prevalence settings like primary care clinics. But assuming capacity is naive or willfully ignorant in hospitals, particularly when patients are being asked to make high-stakes decisions.

Here’s another problem: Providers are pretty bad at recognizing incapacity. Dr. Sessums and her co-investigators found that physicians identified incapacity only 42% of the time when it was actually present. (The gold standard is a formal capacity evaluation, generally conducted by a neuropsychologist or forensic psychiatrist.) Their research offers this small consolation: Physicians were generally right when they said patients were incapable.

Hopefully all of this has made you a little nervous. So what’s the solution?

Structured clinical judgment
Like everything in medicine, you need a reliable approach; think about reading a chest X-ray or ECG. Whatever the circumstances, you follow the same steps from beginning to end before reaching your final conclusions. So too with capacity.

A number of bedside tools exists. Hospitalists often reach for the Mini-Mental State Examination (MMSE), the time-honored cognitive screener—but unfortunately, the MMSE has its problems. For starters, it lacks what psychologists call “ecological validity,” which means that the test items have nothing to do with the specific medical decisions patients are being asked to make. And ultimately, the MMSE’s iffy psychometrics limit its utility; the screener is helpful only when patients ace it or flunk it. Middling scores, which are common, don’t get you off the dime.

I like the Aid to Capacity Evaluation (ACE ), which first appeared in the Journal of General Internal Medicine way back in January 1999. (See “Assessing capacity,” below. ACE’s advantages include straightforward administration and scoring, ecological validity, good psychometrics, and the fact that it’s free. Its sensitivity and specificity for incapacity are 0.81 and 0.91, respectively. Positive and negative predictive values, which vary as a function of prevalence (base rate), appear in “Predicting incapacity.” 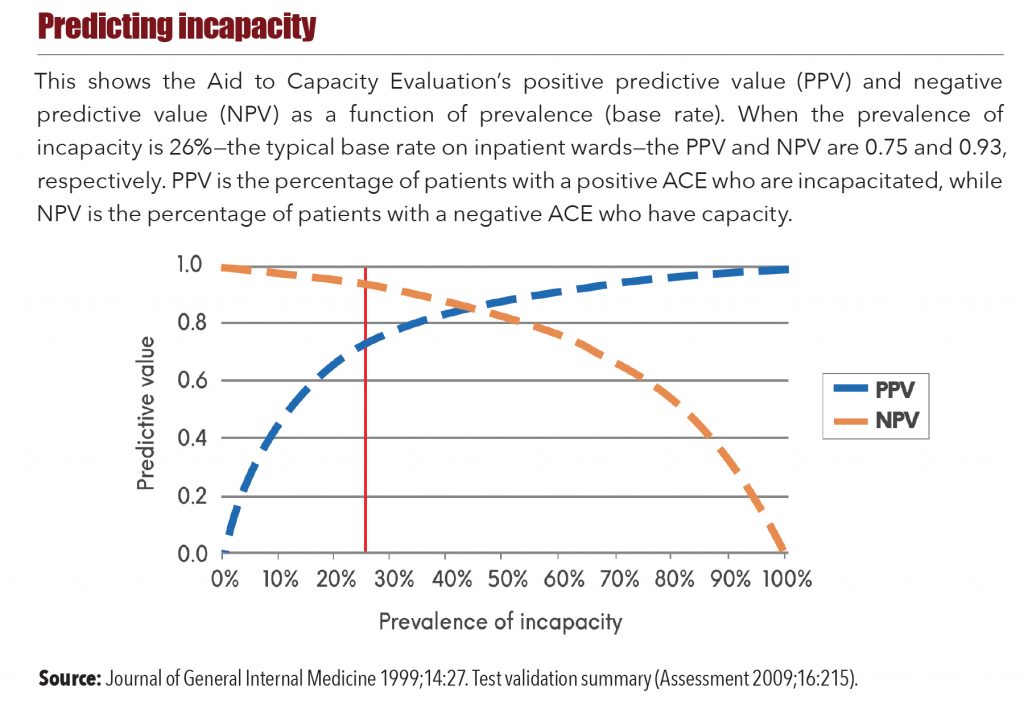 Evidence in action
Let’s take the fictitious but familiar case of Ms. Smith, who was admitted last night with syncope, tarry stools and a hemoglobin of 7.6 g/dL. She’s 86 years old, lives alone in her own home and drives short distances around her neighborhood. Despite the seeming independence, her daughter tells you that she’s pretty forgetful and needs help managing her life.

GI, of course, wants to scope her, and Ms. Smith could probably use a few units of blood. Is she able to consent to these common, relatively low-risk procedures and treatments?

You assess Mrs. Smith for incapacity using the ACE and determine that she’s probably incapable of consenting to endoscopy and blood transfusion. You order a neuropsychology consult and schedule a care conference with her family to discuss substitute decision-making.

David A. Frenz, MD, is a private practice physician and health care consultant. You can learn more about him and his work at LinkedIn or www.davidfrenz.com.

Assessing capacity
TO USE the “Aid to Capacity Evaluation” tool, assess the patient in each domain, scoring items “yes,” “no” or “unsure.” All of the resulting information is then used to form an overall opinion concerning capacity. Visit the University of Toronto’s Joint Centre for Bioethics for detailed instructions on administration and scoring.