ALTHOUGH THE OPIOID EPIDEMIC continues to get nonstop media coverage, tobacco and booze are still public enemies No. 1 and No. 2. According to government sources, cigarettes and alcohol kill 480,000 and 88,000 Americans each year, respectively. In contrast, there were “only” 35,000 opioid overdose deaths in 2015.

If you’re like most hospitalists, alcohol is a huge chunk of your census. A large systematic review—65 studies, 101,000 patients—in the June 9, 2006, issue of Drug and Alcohol Dependence found that 17% of inpatients screen positive for unhealthy alcohol use. Investigators used self-reported scales and measures, which likely underestimated the true prevalence. The number was nearly identical in emergency departments—16%— but jumped to an incredible 26% when an objective measure, blood alcohol concentration, was used instead.

If those statistics seem high, consider data for the general population. According to the Centers for Disease Control and Prevention, 17% of Americans binge drink. There is considerable geographic variability with Tennessee (11%) and North Dakota (25%) representing the extremes. But even the numbers on the low end of that range represent a lot of heavy drinking.

At least 17% of inpatients screen positive for unhealthy alcohol use.

I could go on, but here’s some final context. According to the National Highway Traffic Safety Administration, 28% of all fatal motor vehicle crashes involve a drunk driver.

Drinking targets
So how much is too much? For years, we’ve been using the National Institute on Alcohol Abuse and Alcoholism’s definitions for low-risk drinking, which are:

According to those definitions, one drink contains 14 grams of absolute or “pure” alcohol. That corresponds to 12 ounces of regular beer, 5 ounces of table wine or 1.5 ounces of distilled spirits. The latter is the same as “hard” liquor: vodka, gin, whisky, rum and so on.

On face value, these targets feel about right: a couple beers during a football game or a glass of wine with dinner. But a new study in the April 14 issue of The Lancet just blew everything up.

Half that
The authors pooled about 600,000 subjects from 83 prospective studies. They then looked at the relationship among alcohol consumption, all-cause mortality and various forms of cardiovascular disease. At a minimum, they controlled for age, gender, smoking status and diabetes.

The investigators found a striking relationship between alcohol consumption and the risk of dying. Excess mortality began when usual consumption exceeded 100 grams per week and increased in a basically linear fashion from there. 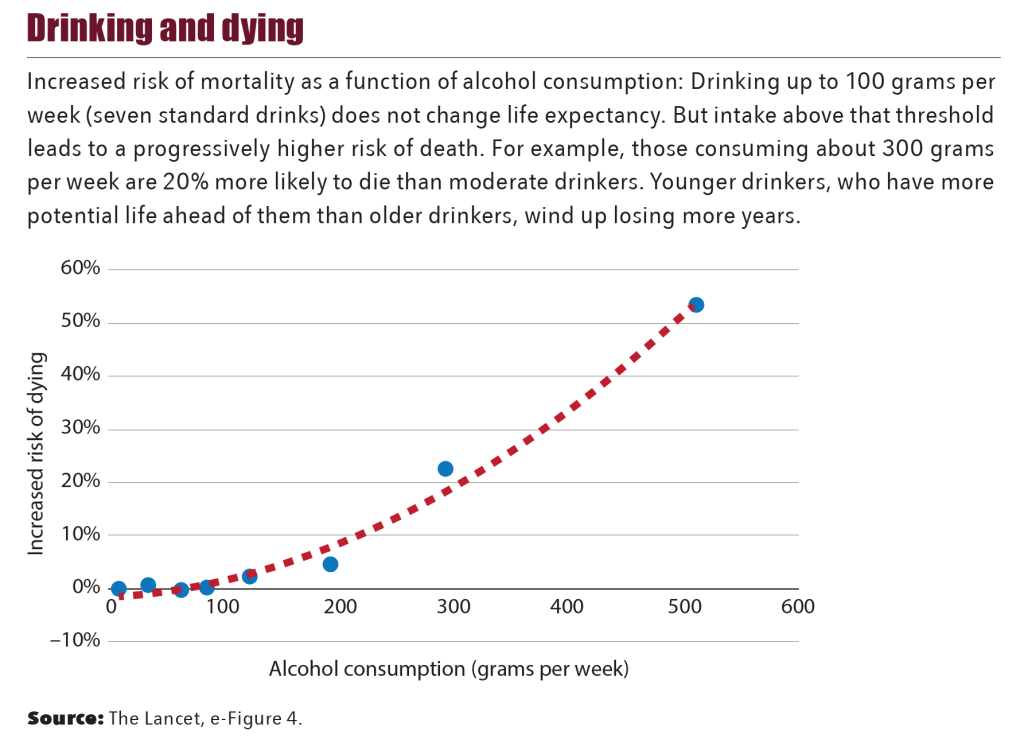 Rewind a few paragraphs. The current low-risk targets are 98 and 196 grams per week for women and men, respectively. That number for women appears OK, but men should actually be drinking half of that target amount.

The flip side of early death is longer life. The authors found that 40-year-old males can add one to two years to their lives by just reducing their alcohol intake from the current upper limit, 196 grams/week, to 100 grams or less. And heavier drinkers—those putting down at least 350 grams per week—can increase their life expectancy by five years by backing off. Numbers for women follow a similar trend.

But what about the salutary effects of alcohol on the heart? The authors found that those are still true—alcohol reduces the risk of MIs—but the benefit comes at a considerable cost. Alcohol increases the risk of stroke, even when consumed at very low levels, and heart failure. It also causes hypertension and blown aortic aneurysms.

The upshot at bedside
Time to put evidence into action: Educate your patients about drink sizes. One drink equals a normal can of regular beer or glass of wine. You can have seven drinks per week, but not in one sitting. Drinking more than that causes strokes and heart failure and ultimately takes years off your life.

Was just commenting that all HCPs need to get up to speed to on vaping and huge difference in nicotine levels vs regular cigarettes. Asking “do you smoke” is no longer adequate. Some patients might even answer no to this since they think vaping is different.

I am glad to see this article. It is a shame but there are a lot of patients on antidepressants and BDZs who are drinking a lot, and this issue is never raised by either the PCP or the psychiatrist prescribing these meds. Similarly, most oncologists never address alcohol as a risk factor for cancer to patients being treated for cancer. The same is true for a lot of cardiologists and neurologists. We love writing prescriptions without much attention to what is going in our patients’ lives. One of the primary reasons I am an integrative physician is because I… Read more »

I loved this article – quick read with very pertinent information, and I love the last section about how to apply this information to our patients! 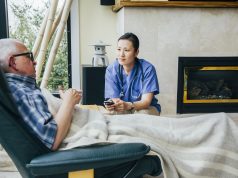