IN MY JANUARY COLUMN, I kicked off the new year with the considerable but generally unrecognized problem of incapacity. As I mentioned in that column, a 2011 systematic review found that 26% of inpatients lack decision-making capacity. Despite this, we seldom pause to determine whether those in our care can truly understand and consent to everything we do to them.

Incapacity is the final common pathway for a host of nasties—congestive brain failure, if you will—that are highly prevalent in hospitals. The twin Ds, delirium and dementia, are always at the top of the differential.

Delirium—or acute confusion, as opposed to the chronic confusion of dementia—affects a big chunk of the hospital census. A systematic review in the July 2006 issue of Age and Aging determined that “at least 20-30% of admissions will be affected.” And nothing has changed with time. A subsequent point prevalence study published in 2016 was dubbed “Delirium Day” by its investigators. It found that 22.9% of inpatients were delirious when universal screening was performed.

A study dubbed “Delirium Day” found that one in five inpatients was delirious.

Unfortunately, like incapacity, we’re not so good at spotting delirium. The authors of the aforementioned systematic review euphemistically pegged “non-detection rates” at between 33% and 66%.

I’m confused
Some of our problems are very fundamental: We’re literally confused about confusion. Donald Rumsfeld would describe this as an “unknown unknown” that is, “the ones we don’t know we don’t know.”

The Diagnostic and Statistical Manual of Mental Disorders (aka DSM-5) is generally the gold standard when it comes to codifying mental status problems. It states, “The essential feature of delirium is a disturbance of attention or awareness that is accompanied by a change in baseline cognition that cannot be better explained by a preexisting or evolving neurocognitive disorder.” The latter refers to a broad range of dementing conditions—Alzheimer’s, HIV, Parkinson’s—and traumatic brain injury.

By disturbed attention, DSM-5 means “reduced ability to direct, focus, sustain, and shift attention.” And problems with awareness manifest as “reduced orientation to the environment or at times even to oneself.”

DSM-5 neatly packages all of this in a criteria set that can be used at bedside to establish the presence vs. absence of disease. But no self-respecting hospitalist would ever be caught consulting the shrink bible. What’s the alternative?

Confusion Assessment Method
DSM-5 criteria sets are often reconstituted as scales and measures to overcome clinicians’ perennial aversion to psychiatry. PHQ-9, which is seemingly everywhere in your EHR, is simply an adaptation of the DSM-5 criteria set for major depressive disorder (“major depression”).

So too with delirium. Sharon Inouye, MD, MPH, (formerly at Yale, now at Harvard) and her colleagues served up the Confusion Assessment Method (CAM) way back in the Dec. 15, 1990, issue of the Annals of Internal Medicine. The current version is available for free from Dr. Inouye’s Hospital Elder Life Program site and may already be baked into your EHR. It consists of simple probes that address these domains:

(An offshoot, the CAM-ICU, is available for patients who are mechanically ventilated and nonverbal.) Per a systematic review in the May 2008 issue of the Journal of the American Geriatrics Society, the CAM has a sensitivity and specificity of 94% and 89%, respectively. “Predicting delirium” on page 9 provides the CAM’s predictive value as a function of prevalence.

Evidence in action
Let’s take the hypothetical example of Ms. Johnson, a retired schoolteacher, who wound up on your service after fracturing her hip. Ortho did its surgical magic yesterday and she appears to be quietly and comfortably convalescing when you round on her in the morning.

But Ms. Johnson’s daughter, Brenda, is at the bedside and expresses concern that her mother “seems out of it.” You administer the CAM, which is positive. Now what? You advise Brenda that it’s likely—a 68% chance— but not totally certain that her mother is delirious, and that anesthesia and opioid analgesics are the top suspects. You alert Ms. Johnson’s nurse of this development and institute a calm environment with reorientation cues. The following day, Brenda reports that Ms. Johnson seems like her old self and her CAM is now negative.

My gloss: Nurses could administer the CAM as a matter of course—but that would be just one more task in a VERY long list that includes fall risk and skin integrity. So I take it upon myself, particularly because we miss so much hypoactive delirium. In fact, I formally assess orientation and attention at every encounter, which literally takes two minutes. It’s something to think about. 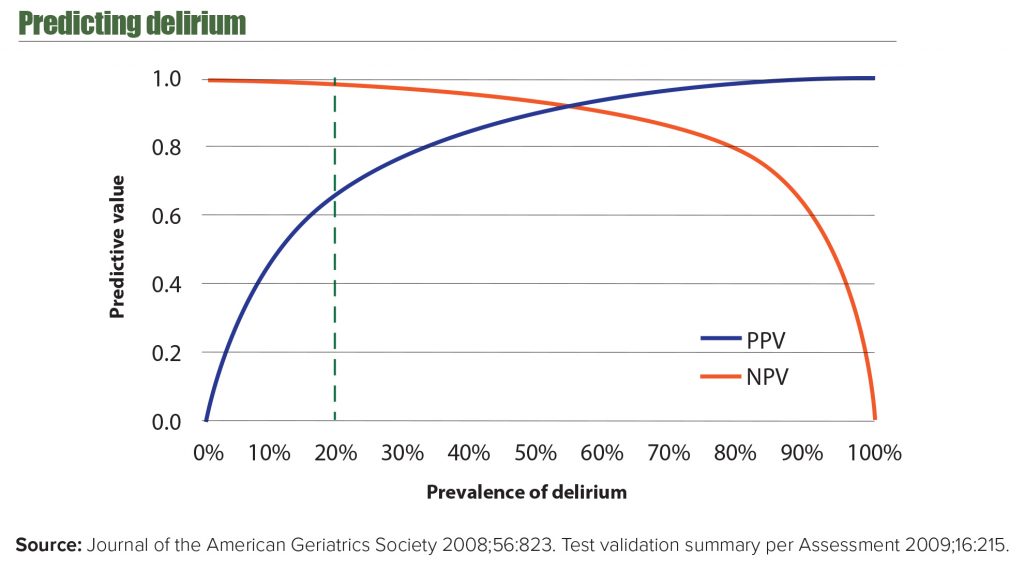 This graph shows the Confusion Assessment Method’s positive predictive value (PPV) and negative predictive value (PPV) as a function of prevalence (base rate). When the prevalence of delirium is 20%—the typical base rate on inpatient wards—the PPV and NPV are 0.68 and 0.98, respectively. PPV is the percentage of patients with a positive CAM who are delirious, while NPV is the percentage of patients with a negative CAM who are not delirious.