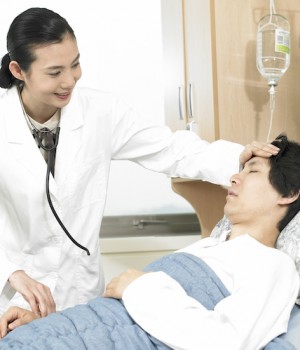 As of this spring, Clostridium difficile is the superbug that hospitalists are most likely to encounter. While the rate of MRSA infections has dropped steadily since 2005, C. diff incidence is on the rise, with rates in some hospitals now surpassing those of MRSA. Just as disturbing is the increase in reported cases of C. diff infections caused by the much more toxic NAP-1 strain.

The good news is that physicians can now take advantage of several new developments that have a direct impact on patient care, according to John G. Bartlett, MD. Dr. Bartlett, a professor of medicine and infectious diseases at Baltimore’s Johns Hopkins University, has been an expert on C. diff since the bug was first discovered in 1978.

During a presentation on C. diff at this spring’s Society of Hospital Medicine conference, Dr. Bartlett pointed out that new forms of testing are reducing the number of false negatives. Plus, new guidelines now give hospitalists guidance on nearly all clinical decisions, including putting a new emphasis on barrier precautions and antibiotic restraint, and on treating seriously ill C. diff patients with combination therapy.

And experts now have a better handle on the antibiotics that induce C. diff infections. “Most common have been cephalosporins “cefotaxime and ceftriaxone “and clindamycin,” Dr. Bartlett said. “Now, fluoroquinolones are added, and they are new and very important.”

Infection control
New guidelines from the Society of Healthcare Epidemiology of America (SHEA) and the Infectious Diseases Society of America (IDSA) stress the importance of barrier precautions to control transmission, including the use of gloves and gowns. The guidelines, which were published in Infection Control and Hospital Epidemiology in May 2010, also recommend putting patients in single rooms or cohorting C. diff patients, and giving each patient a dedicated commode.

The new guidance also confirms the key role of hand hygiene with soap and water to control C. diff infections ” although, Dr. Bartlett pointed out, soap is often “difficult to find” in hospitals because of the attention given to alcohol-based hand hygiene.

While alcohol-based cleansers help reduce MRSA outbreaks, they don’t effectively eradicate C. difficile spores. Health care workers decontaminating their hands with alcohol-based products, the new guidelines say, “may simply displace spores over the skin surface.” (Because any recommendation against alcohol rubs may inadvertently raise the rates of MRSA and other nosocomial infections, Dr. Bartlett said the recommendation to stress soap-and-water handwashing should be implemented only during outbreaks.)

Cleaning, particularly with bleach, is also key, but it’s not always easy in hospitals because bleach corrodes some surfaces. (Household bleach should be used in a 1:10 dilution.) In areas with higher C. diff rates, the new guidelines call for using chlorine-containing cleaners or other sporicidals.

As few as 3% of healthy adults are colonized, and the new guidelines recommend against the routine screening of asymptomatic potential carriers, either patients or health care workers. But according to Dr. Bartlett, C. diff can be found in 20% to 40% of hospitalized patients, and in as many as 50% of hospital rooms.

“The infection directly correlates with the time you spend in the hospital,” he explained.

Antibiotic control
The other key strategy to prevent C. diff outbreaks “antibiotic stewardship “can be thorny, given the fact that one-third of all patients in U.S. hospitals receive antibiotics, Dr. Bartlett said. Studies show that nearly all patients with symptomatic C. diff receive antimicrobials within 14 days of the onset of diarrhea. According to Dr. Bartlett, experts now see the possible need to restrain the use of fluoroquinolones.

“In American hospitals, fluoroquinolones and cephalosporins are probably the leading causes of C. diff,” he noted. Because you must stop the inducing agent, hospitalists need to avoid replacing antibiotics with any of the “big three” that have been linked to C. diff infections: clindamycin, broad-spectrum beta-lactams and fluoroquinolones.

Because patients who have had C. diff are so determined to avoid agents that make them vulnerable to the infection again, “I give every patient this list,” Dr. Bartlett said.

Fortunately, he said, testing for C. difficile is rapidly changing, and hospitalists need to know what type of test their labs use. The most common one is enzyme immunoassay (EIA), which is “fast and cheap” but not very sensitive, Dr. Bartlett said, resulting in false negatives.

A newer approach is polymerase chain reaction tests for toxigenic C. difficile. “Here, false negatives are rare, but there could be false positives,” he noted.

Given the limitations, particularly of EIA testing, “if a patient probably has it clinically,” said Dr. Bartlett, “you may have to treat on the basis of clinical suspicion that supersedes what you get from the laboratory.”

How C. diff manifests itself can range from only a case of mild or moderate diarrhea all the way through to fatal pseudomembranous colitis. It is often, but not always, accompanied by cramps, fever, an elevated fecal white blood count and leukocytosis.

Another key is its odor, which is so “distinctive” “”sickly sweet” and sometimes described as being like “horse manure” “to be considered “an urban legend,” Dr. Bartlett said. “Nurses say they know it by the odor. I use it as a clue.”

Older people are much more vulnerable, he said, and experts now think that C. diff may be related to immunosenescence. In addition, monoclonal antibodies to the toxins associated with the bug “seem to play an important role in the control of the disease,” Dr. Bartlett added. “The next step may be a vaccine.”

The reason C. diff is attracting so much attention is because of the prevalence of a more virulent strain, NAP-1, which has led to a four-fold increase in mortality due to C. diff infections in North America and Europe in the past 10 years. NAP-1 produces 20 times as much toxin in vitro as other C. difficile strains, and it is resistant to fluoroquinolones. Mortality runs between 5% and 10%, with the highest rates among older people.

A way to tell how lethal the disease may be is to look at the patient’s white count. “It turns out that the white blood count is the best lab test to predict death,” said Dr. Bartlett, “especially if it is more than 20,000 cells/μL.”

Treatment recommendations
In terms of starting treatment, Dr. Bartlett said not to wait for lab results and to stop the antibiotic that is likely causing the infection. About one-third of patients with only mild disease will be controlled by stopping the inducing agent.

The new SHEA-IDSA guidelines say that for mild to moderate disease, the first drug to use is oral metronidazole for two to three weeks.

For seriously ill patients, said Dr. Bartlett, “oral vancomycin is now clearly favored.” Also for C. diff patients who are seriously ill, he recommended IV metronidazole and high-dose vancomycin (500 mg four times a day), saying that you may need to give the vancomycin by enema or via a colonoscope.

Stool transplant is an effective “last resort,” Dr. Bartlett said, although the procedure is not offered in many facilities. A truly last resort for severely ill patients may be surgical colectomy.

Avoid antiperistaltic agents, and Dr. Bartlett said there is also “no clear role” for probiotics; the only one that appears to decrease recurrences, when given in combination with vancomycin, is Saccharomyces boulardii. According to the new guidelines, you shouldn’t give the probiotic to critically ill patients, and it has been associated with fungemia in immunocompromised patients and patients with central venous lines.

Costs and complications
Even though Dr. Bartlett said he prefers vancomycin to metronidazole to treat C. diff, cost is a major concern. His hospital, like others, is giving patients a generic intravenous formulation of vancomycin to drink. While that can literally leave a bad taste in patients’ mouths, “the price goes way down,” he said “about $80 for a 10-day course compared to $800 for a 10-day course of oral vancomycin parvules.

With the relapse rate hovering at 20%, Dr. Bartlett said that pulse therapy with vancomycin can work for some patients with multiple recurrences. By first tapering the regular dose and then giving tiny doses every other day for about six weeks, he explained, the idea is to keep the C. diff in check while allowing normal flora to reestablish in the colon.

Finally, Dr. Bartlett said, he is concerned about some of the political fallout of rising C. difficile rates, with Medicare debating whether to add the infection to the list of “preventable complications” it will not pay for.

“C. difficile is not always preventable,” Dr. Bartlett pointed out. “In fact, it’s a common complication with fluoroquinolones ” the very class of drugs that Medicare wants us to use with community-acquired pneumonia.” Instead of considering C. difficile to be entirely preventable, Dr. Bartlett said, it would be better to establish a threshold of the number of C. difficile cases to expect, which he estimated as between three and nine cases per 1,000 admissions.

The high price of C. difficile