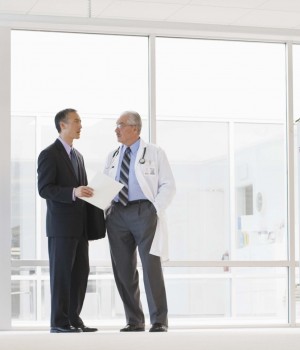 AFTER HIS MOTHER DIED from a fatal but preventable complication of heart surgery in 2003, Michael Rothman, PhD, couldn’t help but wonder why no one had noticed that her health was deteriorating before it was too late.

Dr. Rothman didn’t blame the physicians and nurses who cared for his mother, who he thinks did everything by the book. But after asking some questions, he and his family concluded that the system itself had failed.

“What happened to her was preventable up to the last moment,” says Dr. Rothman, a chemist by training who works as a data analyst. His mother had undergone valve replacement surgery to repair aortic stenosis, but then died of cardiac tamponade just days after being discharged. Surgeons took steps to reverse the condition, but it was too late.

“Nursing assessments are an excellent source  of information about a patient’s functional status.”

That’s when Dr. Rothman and his brother, Steven Rothman, an electrical engineer, decided to work to ensure that other patients wouldn’t face the same fate. They embarked on a decade-long project that produced a scoring system.

That system, known as the Rothman Index, is a software program that has now been embedded in the EHRs of more than 80 hospitals and other care facilities. It uses more than 50 data points to track inpatients’ functional status, producing a score that tips off doctors and nurses when patients are deteriorating, even when signs are subtle.

You may think that the last thing you need is another system where you have to enter more patient data and be bombarded by more false alarms. But the beauty of the Rothman Index is that it uses data already being electronically entered, and it generates few false alarms.

Data: hard to get or use

When the Rothman brothers began talking to health care personnel about their mother’s case, they were surprised to learn that clinicians had a vast amount of electronic data available—but that those data weren’t particularly helpful.

“We came to understand that the data were not easily accessible or interpretable,” Dr. Rothman says. “It was like having an electronic filing cabinet.”

They were also shocked to learn that doctors had no scoring system to monitor patient status and to fire alerts when patients showed signs of deteriorating. They worked with a nurse informaticist to create a data model to do just that and first tested it on 70 inpatients, then 1,200 and ultimately 25,000.

Much of that initial testing took place at the hospital where their mother died; they had asked the CEO if they could experiment with their score in the EHR. “We were surprised they let us in,” he admits, “because neither of us had a medical background.”

But Dr. Rothman credits that lack of medical training as critical to their success. “If we had been physicians,” he says, “we would have dismissed nursing data as inconsistent and relatively meaningless. Not knowing that, we found instead that nursing assessments were an excellent source of information about a patient’s functional status.”

While hospitals typically monitor vital signs to trigger alerts—think rapid response teams—Dr. Rothman found that nursing assessments, which look at whether patients are eating, walking and thinking clearly, were equally important, if not more so.

“When someone is deteriorating,” Dr. Rothman explains, “these functions are the first to go. Our bodies sacrifice functionality to maintain vital signs, so your digestion will shut down and you’ll have difficulty thinking before your vital signs reveal a problem.”

Further, “if you detect a situation in which a patient is in imminent danger of cardiac arrest, you’ve already lost the game,” he adds. For clinicians to make a difference, they need to detect instability 12, 24 or 72 hours before.

To help detect instability, the index “takes information from nurses, boils it down and integrates it with vital signs and labs, then presents it to doctors visually.” The scoring system also provides longitudinal data. “Not only can you see what the nurse on this shift thought, but what nurses on previous shifts thought.”

That was one major problem with his mother’s care: Nurses didn’t have easy access to data from previous shifts. As Dr. Rothman puts it, “They couldn’t see the trend.”

In hospitals that use the software, physicians and nurses can access the index score in a variety of ways. Some hospitals have set up kiosks at nursing stations that display a graph of patients on the unit. Patients with the lowest scores, which are the worst, might appear at the top of that list in red. “It brings your eye to the sickest patients,” Dr. Rothman notes. Hospitals also highlight patients who have experienced a sharp decline in scores.

And several hospitals are using the index to prevent unnecessary readmissions. Several published studies, including one in the September 2013 issue of Medical Care, have shown that the index can serve as an independent predictor of 30-day readmissions.

Dr. Rothman says that result gets at one of the strengths of the index: It tracks changes in functional status over time. “We look at the score not just now, but three hours ago and six hours ago,” he says. “While patients may score OK right now, three hours ago they looked bad and six hours ago they looked pretty good, so you’re seeing a lot of instability. Or has the patient been at a high level for 12 hours? It makes a difference.”

Dr. Rothman notes that the index has been particularly embraced by oncologists, probably because their patients are so high acuity and can get in trouble so quickly.

The scoring system is also being used to trigger palliative care consults. He’s also talked to hospitalists who use the index to prevent emergent conditions and to prioritize rounds so they see the sickest patients first.

Other physicians have told him that they like the system because it doesn’t contribute to alarm fatigue. While the number of alerts triggered by the index varies, Dr. Rothman says that some client hospitals receive only one or two a day.

The index produces fewer false alarms, he points out, because it doesn’t rely solely on changes in vital signs, which can be erratic.

“You can have someone whose systolic blood pressure spikes up to 200, but five minutes later, it’s 160,” he explains. “If you trigger an alarm over every variation in vital signs, most of them will be worthless.” Integrating nursing assessments, on the other hand, “tamps down the impact of jumpy vital signs because those measurements are more stable.”

More information about the index is online at PeraHealth. The company, which sells the index, is based in North Carolina (www.perahealth.com).