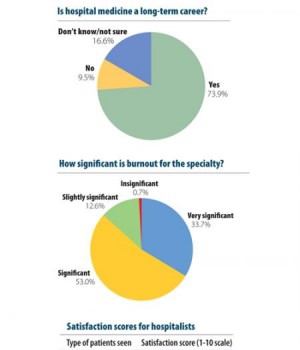 Published in the June 2011 issue of Today’s Hospitalist

How satisfied are hospitalists with the specialty and their jobs? According to data from the 2010 Today’s Hospitalist Compensation & Career Survey, hospitalists give their chosen field relatively high marks. The overwhelming majority say they’re satisfied with their careers, and most view hospital medicine as a long-term endeavor.

Not all the news, however, is so sunny. Despite those rave reviews, large numbers of hospitalists worry that burnout remains a big challenge for the field. Here’s a look at the numbers.

Satisfaction
The good news is that physicians say they are overwhelmingly satisfied with their careers as hospitalists.

Volume and schedule
Certain trends linking patient volumes and work schedules to job satisfaction probably come as no surprise. The more patients that hospitalists see per shift, for example, the lower their satisfaction scores.

Career plans
To get more information about hospitalists’ career satisfaction, our survey asked the following two questions: Is hospital medicine a long-term career, and how many years do you plan to continue in your current job?

Again, the news was fairly positive. Nearly three-quarters of hospitalists (73.9%) said they consider hospital medicine a long-term career. only 10% said the specialty would not be their home in the long run, while 16.6% said they didn’t know.

When we asked how many years hospitalists planned to remain at their current jobs, the mean answer for all respondents was 9.69 years. That number was considerably higher for pediatric hospitalists (12.69 years) and just a tad lower for adult hospitalists (9.04 years).

Burnout
While hospitalists seem fairly upbeat about the field, concern about burnout remains. Respondents said that they are concerned about the impact of burnout not only on themselves, but on the specialty as a whole. 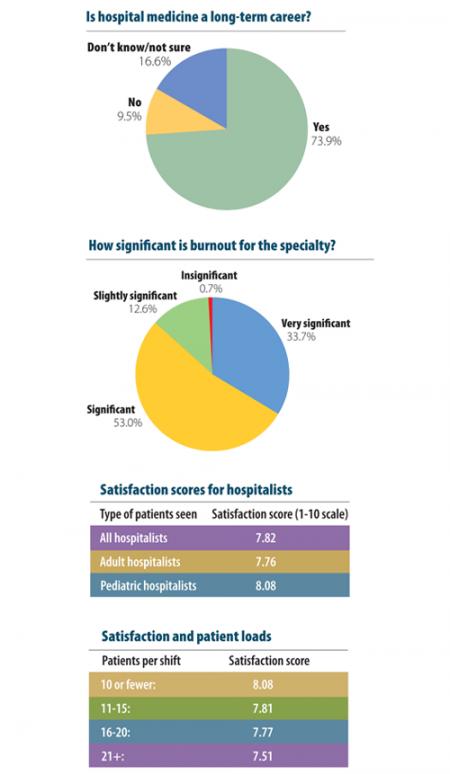