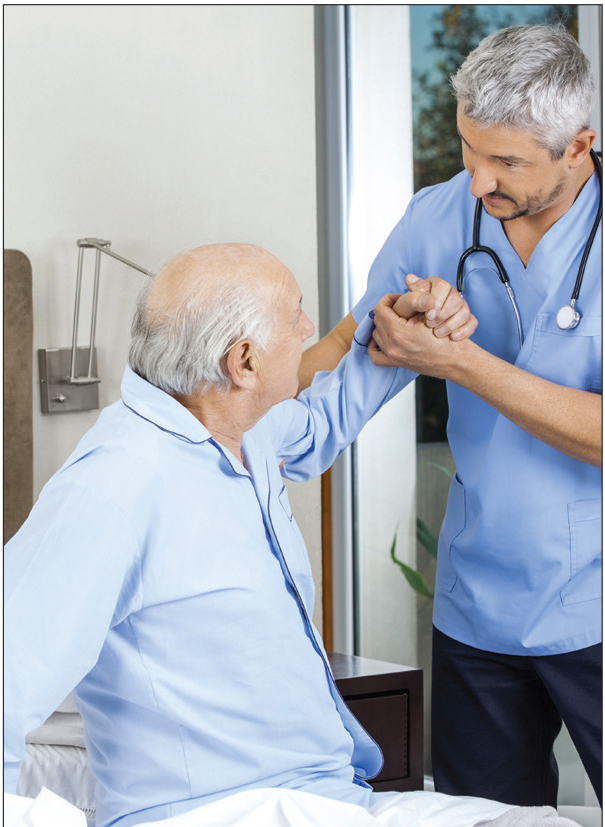 While analysts have long worried that Medicare’s thorny rules for admitting patients to hospice care may keep eligible individuals from getting hospice care, new research points to problems with keeping some patients in hospice care after they have been admitted.

Medicare rules state that to be eligible for a hospice benefit, patients must be in their last six months of life. Physicians have often worried that if a patient they referred to hospice care did not die within that six-month window, federal regulators would question their decision-making.

FOR MORE on caring for elderly patients: A hospitalist’s personal struggle with palliative care; May 2021. Related articles on end-of-life care.

The good news is that in recent years, Medicare has changed its rules for admission to hospice to make the process more flexible “and to recognize that it’s very difficult for physicians to predict exactly how long a patient will live. There are signs, however, that hospices may still feel some pressure to discharge patients they think aren’t sick enough to qualify for hospice benefits.

A study in the August issue of the Journal of the American Geriatrics found that of the 139 patients who were discharged from a hospice, slightly more than one-third died within six months. While many of those patients “nearly 70 percent “returned to a hospice before dying, the other 30 percent died without ever returning to hospice care to get the services they needed.

The results underscore the difficulty physicians have predicting when patients with terminal illnesses will die and then incorporating that prognosis into a decision to refer a patient to hospice care. As the study’s lead author, Jean S. Kutner, MD, MSPH, says, “We’re terrible at predicting patient survival.”

While researchers found no significant associations between patient survival and factors like sex, length of hospice service and diagnosis, they did find one surprisingly effective way to predict which patients are most likely to die after being discharged from hospice care: Ask the patient or a family member if the condition seems to be worsening.

The strategy was the single most effective way to identify which patients would die within a short time “and could benefit from hospice care.

To find out why some patients are being inappropriately discharged from hospice care “and to get a better understanding of Medicare’s complex rules regulating hospice care “Today’s Hospitalist talked to Dr. Kutner, who is associate professor of medicine at the University of Colorado Health Sciences Center in Denver.

Were you surprised that roughly one-third of hospice patients died within six months of being discharged?

I thought the number would have been higher. I became interested in this research because of the anecdotal experiences of colleagues who have had problems knowing when to discharge patients from hospice care.

Some said they struggle whether to discharge patients from hospice who seem like they’re going to live more than six months. When they can no longer document that the patient’s condition is declining, they discharge that person, but only after much discussion. While hospice staff feel bad about making this type of decision, they feel even worse when they find out the patient died two weeks later. Based on that experience, I would have expected the number to be much higher.

In the past, physicians have been reluctant to refer patients to hospice care because of the complex Medicare rules. Has the admission process improved in recent years?

Patients are still referred quite late for hospice care. We know that the average length of stay is still less than one month, so there are patients who are not being referred on the front end. I don’t think, however, it’s necessarily a concern about the federal government coming after physicians.

The reasons are more multifactorial. Physicians may not always recognize when patients need hospice care. There is some reluctance on the part of patients and their families to say now is the time for hospice, because they often can’t receive certain types of treatments while enrolled in hospice. It’s awfully hard to receive hospice benefits while you’re still receiving palliative chemotherapy or radiation therapy or some of the more expensive medications for heart failure.

Who makes the decision to discharge a patient from hospice care?

Why might a hospice decide that a patent with terminal illness is well enough to be discharged from hospice care?

Very anecdotally, it’s not unusual for patients admitted to hospice to very quickly start feeling a little better. Their symptoms are well-controlled, they’re not suffering from pain or other symptoms, so they may actually become more functional. They may be able to eat better, and their family is getting more support and their caregivers aren’t completely stressed out.

Your research pointed out that the single strongest predictor of death after discharge was a report from the patient or surrogate that the patient’s condition has worsened. If a patient gives you that kind of information, is it enough evidence in terms of Medicare requirements to keep that person in hospice care?

If patients say they are doing worse, it puts the onus on us to figure out what is wrong. The key is that if you ask that question and the patient or the family says, “No, I’m doing worse,” we need to figure what that means and how we can document that. Are they not eating, is their pain worse, are they losing weight? What is it that is making that patient or family member say the condition is worse? We should be able to document that.

How will that help meet the Medicare requirement?

The bigger issue is that if a patient meets the enrollment criteria, he or she was sick enough to get into hospice in the first place. Unless there’s been a big turnaround, those patients are still sick and need those services.

Are there steps hospices can take to make sure they don’t discharge patients prematurely?

After seeing the results of this research, a number of the hospices that participated in the study changed their procedures for how they follow patients who are discharged from hospices to incorporate information from the patients themselves. That’s one example of how some hospices are making progress in this area.

Several other hospices I’ve talked to have put into place some innovative procedures. One has a process where the patient is evaluated by the medical director. There is also a waiting period where hospice staff closely follow the patient for a 30-day period to really see how that person is doing.

What advice do you have for hospitalists and other physicians who work outside the hospice setting?

Published in the September 2004 issue of Today’s Hospitalist