Today’s market for hospitalists is red hot. Given how hard it is to recruit hospitalists, we are all eager to hit on the best way to find the best candidates. Many of us are asking ourselves this question: Should I recruit on my own or hire a professional to do it for me? While there are advantages and disadvantages to both approaches, to my mind, the do-it-yourself method is the way to go.

But first, an aside and a disclaimer. As a young physician just about to finish residency, I had a bad experience when I found myself in the position of “recruitee.”

I received at least one phone call a day from recruiters and ended up talking to so many that I lost track of who was who and which job was which. The upshot was that I told two different recruiting firms that I was interested in the same job.

When it was time for me to sign the contract, both companies demanded payment in full from the hiring hospital. Worried that my future employer, faced with a double bill, would balk at hiring me, I started having visions of a future ruined by unemployment and massive, unpaid student debt.

In the end, the hospital worked out a deal that satisfied its pocketbook and the demands of both recruiters. But the experience left me wondering if there was a better way to match candidates to positions than through the cut-throat business of contracted recruiting, a process with which many soon-to-graduate residents are unfamiliar.

Now in my third position out of residency, I still believe that recruiters often add little to the effectiveness of any given search, while adding a great deal to its cost.

Most physicians are perfectly capable of conducting a job search without the aid of outsourced recruiters. They simply look online at job postings or in the advertising sections of the major journals in our field. If doctors looking for positions check those listings with the regularity that I do–and I’m not even looking for a job!–I don’t think we need to worry that the word on opportunities isn’t getting out there.

Certainly, recruiters offer benefits. They coordinate marketing plans and send out direct mailers, and they pre-screen applicants for clients based on pre-determined criteria. However, when it comes time to interviewing and hiring a candidate, I must say that I find no value added, despite the high cost of the services rendered.

I recently interviewed a candidate whom I plan to hire and who wants to return to clinical medicine but currently works for a high-end physician recruiting firm. That firm, which doesn’t recruit hospitalists, conducts searches for department heads at major academic centers and for CEOs of major health care networks.

The candidate explained to me in detail how the process works. First, the firm independently determines who the top candidates for a position might be. In many cases, representatives then fly to meet those candidates and promote the position before interviews officially begin. The firm and its recruiters are then involved in every aspect of the interview process.

Hospitalist recruiting has not reached this preemptive point yet, nor does it need to. When I asked this fellow how he found the job at my hospital, he said he simply cold-called local hospitals that had hospitalist programs.

I asked him if he had looked at Philadelphia-area advertisements listed by recruiters, and he said that he had. However, he reasoned that it would be best not to go through a recruiter–because he knew that he would be a more attractive candidate if there were no recruiting costs tied his application.

Those costs can now be as high as $25,000. That a recruiter decided to not use a recruiter himself should give us some indication that perhaps money spent on recruiters could be best put to use somewhere else. 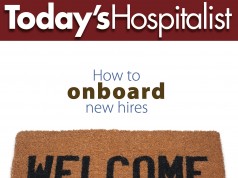 How to onboard new hires