Published in the July 2008 issue of Today’s Hospitalist

WHAT IF YOUR HOSPITAL gave you “an extra set of eyes” to help review medications, analyze patient charts and avoid problems with the medications you’re prescribing. Would you and your colleagues make fewer errors and improve the quality of patient care?

Talk to the hospitalists at Wesley Medical Center in Wichita, Kan., and the answer to those questions is “yes.” That’s because the seven-member hospitalist group at the teaching hospital has the luxury of working with a clinical pharmacist who spends about half of her time with them.

The pharmacist-hospitalist partnership has helped streamline patient care and reduced the number of errors and omissions being made by busy hospitalists. But the hospital is also hoping that giving the hospitalist program its own pharmacist may boost its bottom line by improving overall performance on quality measures being used by payers like Medicare.

Dr. Kramer then provides recommendations based on her reviews. She typically analyzes between 25 and 45 patient charts each day and meets in person informally with about one-third of those patients to confirm or clarify issues.

Every day at 2 p.m., Dr. Kramer meets with William Park, MD, director of the hospitalist group, or his partners, for 30 minutes or so. They compare notes, discuss medication options and review any outstanding questions about patients.

If individual hospitalists want to talk to Dr. Kramer throughout the day, they call her cell phone, page her or leave notes in the charts. In response, Dr. Kramer may track down articles or problem-solve for issues like medication reconciliation. “It’s like having our own drug information specialist all the time,” Dr. Park says.

He notes that when the service first got up and running, the program’s hospitalists had a chance to talk to the pharmacist one-on-one on the unit floor. But as patient volume increased, he says, that’s changed.

In a few months, however, hospitalists will have easier access to Dr. Kramer. Wesley is adding a hospitalist-only floor, a move that will centralize hospitalist personnel and patients and cut down on the miles of walking the physicians do every day.

Benefits of collaboration
Dr. Park says the genesis of the program was the fact that the physicians, who had gotten used to rounding with a pharmacist while they were residents, wanted to continue to have that convenience and expertise. For the hospitalists, he notes, the six-year-old program has proven to be “invaluable.”

He adds that Dr. Kramer often picks up on issues that hospitalists might miss because the doctors are so focused on primary medical issues. She may remind physicians to give immobile patients prophylaxis for deep vein thrombosis, for example, or to prescribe a medication to prevent stress ulcers.

“All of these things that you don’t think about on a daily basis can fall through the cracks,” Dr. Park says. While the group does not have benchmark data for adverse events because those are voluntarily reported, “we know our mortalities are down,” even if that’s hard to attribute to only one intervention.

Dr. Kramer also has a major impact on prescribing and patient education at discharge, which is, Dr. Park points out, a time when many medication errors are made.

“Sometimes you have patients who need extra time to get their medications set up correctly,” says Dr. Park. “She catches things like having patients switch from IV to PO and reminding us to stop a patient’s antibiotic treatment. This ends up saving the hospital quite a bit of money.”

While he can’t say exactly how much, “the savings could be in the millions if we meet our core measures.”

Program challenges
One tip that Dr. Park passes on to hospitalists considering a designated pharmacist is to make sure physicians are involved in the pharmacist selection process, instead of relying on administration to just assign a pharmacist to the hospitalist team.

He also points out that with the hospital paying for Dr. Kramer’s time, the intervention is not inexpensive. But Dr. Park says that Wesley administrators appreciate the advantages in patient safety and that the program was an easy sell.

It took the hospital nine months to set up the program, he adds, and a bit longer to work out job duties and responsibilities. Initially, Dr. Kramer was required to do grant writing to bring in funds to support her position with the hospitalist program, but that was dropped because of time constraints.

Dr. Kramer says she is still very careful about how she distributes her time. “Even though our patient load has increased over the years,” she explains, “I spend 50% of my time on patient care and 50%on pharmacy department duties and research.”

While there are certain days when she may spend more time on patient care or on research, it evens out in the long run.

Formal or informal rounding?
Both Drs. Park and Kramer say that one key to such a program’s success is making the pharmacist available to round with the hospitalists. When rounding with physicians, a pharmacist can see the whole picture and listen to details that may be left out of the patient’s chart. The pharmacist can also record thoughts or ask questions right away.

Dr. Kramer notes that she has done both formal and informal rounding, and that each style has its advantages. The downside of going on formal, scheduled rounds is the down time for the pharmacist while the physician focuses on purely medical issues.

Informal rounding “where Dr. Kramer reviews the charts on her own schedule and then confers later with physicians “may be a more efficient use of her time. At the very least, she says, rounding on her own forces her to look more closely at chart details. “That’s because I’m not there to hear the conversation that takes place between the physician and the patient.”

At the same time, Dr. Kramer notes, she prefers the formal rounding that she used to do, working with one of the two day-time hospitalists as he or she visited patients. (Dr. Kramer switched physicians from day to day.)

“Having that conversation and interaction, I end up knowing more about what is going on with the patient,” she says, explaining why she prefers formal rounding. Because rounds frequently touch on issues that aren’t included in the chart, “I gained amore robust understanding of each patient’s situation rather than just reading what the hospitalist wrote on the chart.”

But with the number of hospitalized patients more than double what it was three years ago, this setup became impractical. “Eventually,” she says, referring to the hospitalist-only unit that’s in the works, “we want to go back to it.”

Ingrid Palmer is a freelance health care writer based in West Chester, Ohio. 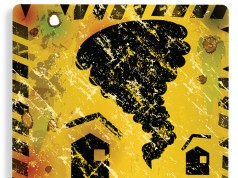 “What’s your plan to evacuate?”