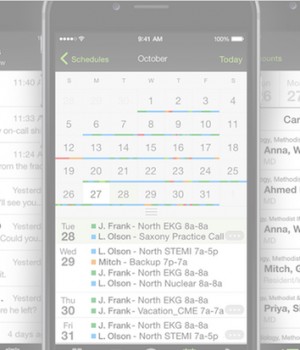 WHILE IT NOW HAS 5,000 MEDICAL CLIENTS NATIONWIDE, Amion (pronounced just like that perennial physician question: “Am I on?”) started off small as a practical solution to one physician’s scheduling problem.

In 1997, the company’s founder, a computer programmer, watched his wife “then a pediatric chief resident “struggle at home to devise paper-based schedules for her residents. After he developed scheduling software for her, he offered the tool to residency programs around the country.

Today, half of Amion’s customers are “enterprises” “hospitals that create and post schedules for multiple departments. Lee Sylvestre, who oversees support and training for Amion, says call centers in those hospitals can quickly locate who’s working within any department and page staff directly from the schedule.

Because Amion has so many institutional clients, the company doesn’t have to do much marketing. “Most folks use Amion as residents and then go on to private practices,” says Mr. Sylvestre. “They take it with them, so it markets itself.”

The other half of Amion’s client base consists of stand-alone groups or departments, including a growing number of hospitalist programs. Hospitalist groups have prompted Amion to introduce several new features, including templates that make it easier to populate standardized block schedules.

Another new feature lets physicians sync work schedules from Amion to iPhones, Google, Outlook and other smartphones. “If your schedule changes,” says Mr. Sylvestre, “your phone or other personal calendar updates automatically.”

And one of Amion’s big advantages, he notes, is price. “We’re far and away the least expensive option,” he says. The software costs $249 a year for an entire group; enterprises need to buy one such license for each section that plans to use it.

Other scheduling products, Mr. Sylvestre claims, can cost nearly that much per physician. He adds that while competing scheduling products try to be more automated, computer-generated schedules are rarely perfect, and groups invariably have to fine-tune the results. With Amion, on the other hand, “Groups have to be more involved throughout the scheduling process,” he says, “but that can make the final fine-tuning easier.”

“Amion is an off-the-shelf tool,” Mr. Sylvestre points out. “We’ll help anyone who needs assistance, but using it requires relatively little training. That lets us keep the price low.”

(To see a sample enterprise schedule, go to Amion’s home page at www.amion.com and put “site” in as the password.)