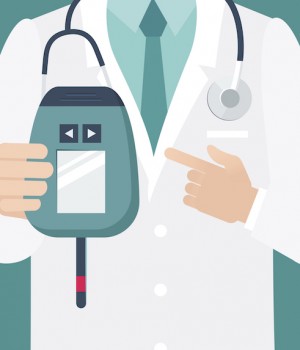 IF YOU LOOK at a typical hospital floor, between one-quarter and almost one-half of the inpatients will have hyperglycemia. While many will have diabetes, either known or unknown, or pre-diabetes, a large minority aren’t diabetic at all but suffering from “stress” or “acute” hyperglycemia.

The good news about stress hyperglycemia is that it often subsides as soon as the stress recedes. But the bad news is that between 30% and 60% of nondiabetic patients who develop transient stress hyperglycemia while hospitalized will have confirmed diabetes within a year. And while they’re in the hospital, these patients stand to experience poor clinical outcomes that include increased length of stay and complications.

That’s why treating and following up on stress hyperglycemia is as important as handling any hyperglycemia experienced by an inpatient with diabetes, says Guillermo E. Umpierrez, MD, professor of medicine and head of the section of diabetes and endocrinology at Emory University’s Grady Health System in Atlanta.

Documenting stress hyperglycemia in the hospital brings it to the attention of outpatient physicians who can follow up, Dr. Umpierrez points out. But you also need to treat it in the hospital because study after study has shown a “strong association between hyperglycemia and poor clinical outcomes.” That can include mortality, morbidity, length of stay, infections and overall complications, according to a study published in the October 2011 Best Practice & Research, Clinical Endocrinology & Metabolism.

Despite that dire warning, a study published in the January 2015 issue of the Annals of Surgery found that clinicians are more likely to treat diabetic patients than nondiabetic patients who develop hyperglycemia, even though “perioperative hyperglycemia may increase the risk of adverse events more significantly in patients without diabetes than in those with diabetes.” As the study stated, that behavior is “a paradox.”

The more recent study looked at perioperative patients at 53 hospitals throughout Washington state from 2010 to 2012. Dr. Umpierrez, one of the study’s coauthors, spoke with Today’s Hospitalist about patients who develop hyperglycemia in the hospital and how to improve their discharge planning.

We really don’t know, and those studies need to be done. But most of us think that acute hyperglycemia is a marker of severity of illness.

Your 2015 study proposed another explanation: that development of stress hyperglycemia helps uncover undiagnosed but existing diabetes.
It is important to measure HbA1c in the hospital. High blood glucose “say 140-180 mg/dL, having a HbA1c above 6.5% or 7% “very likely means the patient is going to have diabetes and he or she just doesn’t know it.

The other reason to measure HbA1c in inpatients with hyperglycemia is that it tells us what level of diabetes control the patient had prior to admission. If a person with diabetes comes in with an elevated HbA1c, that should inform how a physician modifies the patient’s diabetes therapy at discharge to improve glycemic control. The HbA1c is one of the best ways to tailor individual therapy at discharge in patients with known diabetes.

In the Aug. 28, 2014, issue of Diabetes Care, you laid out a strategy for tailoring discharge regimens for patients with type 2 diabetes based on their admission HbA1cs. What is the algorithm?
If someone has an HbA1c less than 7% or 7.5%, they are in control, so they should go home with the same medications they were taking before hospitalization. Those with an HbA1c higher than 7.5% or 8%, however, should be started on oral agents and maybe sent home with some type of insulin.

And an HbA1c that is very high “above 9% or 10% ” likely indicates that the patient should be treated with insulin at discharge. Most people with stress hyperglycemia whose high blood sugar goes away after the stress subsides will not have an elevated HbA1c and will not require any therapy at discharge.

What should clinicians do about that group at discharge?
Everybody who develops stress hyperglycemia should be followed. Data from a couple of reports indicate that after surgery or acute myocardial infarction, one-third of the patients with acute hyperglycemia have diabetes, one-third have pre-diabetes and one-third have normal blood glucose.

We don’t have data from a published study, but it is likely that many patients with stress hyperglycemia in the hospital have impaired glucose tolerance or prediabetes. Their bodies are not able to compensate by increasing the insulin release, maintaining normal glycemia and depressing contraregulatory hormones. It is important to follow these patients because a significant number are at risk of developing diabetes and should be put on diet, exercise, weight loss and other prevention measures.

Your January 2015 study found that patients with known diabetes were “significantly more likely to receive insulin” when hyperglycemic than nondiabetic patients. How should doctors treat perioperative hyperglycemia?
There is strong evidence that insulin is the best treatment for patients with diabetes and for patients “with or without diabetes “with hyperglycemia in the hospital. This can be given in multiple regimens, but many people are treated with a combination of basal insulin with rapid-acting insulin before meals, which we call the basal-bolus approach.

Because patients in the hospital in general eat very little or less than usual, we may not use basal-bolus. But we can use basal-plus: a single dose of basal insulin plus supplements if the blood glucose is elevated. That has been shown to be as effective as basal-bolus.

There is a tremendous amount of interest in the use of oral agents in the hospital. Among them, the safer drugs are called DPP-4 inhibitors. (Dipeptidyl peptidase 4 inhibitor drugs include sitagliptin, saxagliptin, vildagliptin and alogliptin.) For patients with mild to moderate hyperglycemia and an admission blood glucose of less than 200, even a single dose of these DPP-4 oral medications is effective. Or these drugs can be used in a combination with a low-dose basal insulin.

What about using these oral medications for hospitalized patients with more elevated blood sugars?
They are not as effective as insulin, so they are not the best way to treat people with significant hyperglycemia. But for patients on general medical floors with mild to moderate hyperglycemia, oral agents are a lot easier than insulin. They require less nursing care.

Patients who then have consistent or persistent hyperglycemia, as defined as a blood glucose greater than 140 mg/dL, should undergo HbA1c testing. If the HbA1c is elevated and the glucose is elevated, the person has diabetes.

HbA1c is very important. The message for most hospitalists and clinicians is that there is very strong evidence that hyperglycemia both in patients with and without diabetes is associated with increased complications, and hyperglycemia in patients with no previous diabetes is associated with higher complication rates compared to those with diabetes. That may be because they are not used to having high blood glucose.

Why?
People with diabetes may be used to long-term hyperglycemia and can function better in that state. But that is supposition, and we don’t know for sure.

Being in the hospital is a good time to diagnose people with diabetes who didn’t know they had the disease. It is also important to remember that patients with hyperglycemia, with or without a history of diabetes, are going to have more complications and even increased risk of death.

When is the HbA1c too high for surgery?

SHOULD A PATIENT with known diabetes scheduled for a total hip replacement have his elective surgery delayed if his HbA1c percentage exceeds 8% (or 7% or 10%)? Experts agree that perioperative hyperglycemia is associated with an increase in perioperative complications, ranging from infections and acute kidney injury to longer lengths of stay and even death. But the appropriate preop level of glycemic control that correlates with good postop outcomes remains controversial.

In cardiac surgery, “there is some evidence that A1c levels above 7% are associated with increased mortality, myocardial infarction and surgical site infections,” she said. But while there is some evidence on preop A1c levels and adverse postop outcomes in noncardiac surgery patients, the data are less clear, particularly in terms of a potential preop “A1c cutoff.” A professor of medicine and orthopedic surgery at the Medical College of Wisconsin in Milwaukee, Dr. Slawski is chief of the section of perioperative medicine at Froedtert Hospital.

If you feel you need to set a cutoff, said Dr. Slawski, “a rational approach” would take into account that “A1cs above 7% or 8% are associated with adverse events.” That view is consistent with current guidelines from the American Diabetes Association for non-surgical patients, and it’s the approach taken in her hospital for some nonelective surgical patients.

Some patients and physicians may argue that surgeries such as hip or knee arthroplasties allow patients to have a more active postop lifestyle and subsequently achieve improved glycemic control. But Dr. Slawski noted that there is no evidence behind that argument, and it should not be the rationale to proceed to surgery in a patient with poor preoperative glycemic control.

“Uncontrolled diabetes can’t be ‘cured’ with a joint replacement,” she said. On the other hand, for patients who need urgent surgery, “you clearly would proceed independent of the A1c.”

For elective surgery patients, Dr. Slawski explained, “it is reasonable to optimize glycemic control before surgery on a case-by-case basis,” educating patients and surgeons that good perioperative glycemic control will likely be associated with better surgical outcomes.