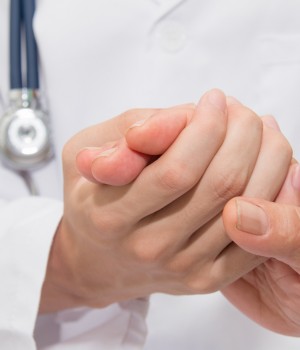 THE PATIENT IS AGITATED and getting worse by the minute. You’ve spent the last half hour trying to calm him down, but nothing seems to work. What do you do?

If you’re working at Ochsner Medical Center in New Orleans, you can call a “code green” and get immediate help dealing with a disruptive patient. Within minutes, a specially trained team shows up at the patient’s room to address the problem at hand. And if the patient can’t calm down, the team has the authority to intervene by posting a security person nearby, for instance, or transferring the patient to the psychiatric unit.

Since being implemented, the code green initiative has changed the way that staff at the medical center “and the six other hospitals in the Ochsner system “manage disruptive patients. While physicians and nurses can call the team, the program’s educational efforts have been so successful that many don’t need help.

The program has also produced some fringe benefits that go well beyond patient management. Because the code green initiative has helped make staff feel safer, the health system has not only seen a rise in provider satisfaction levels, but a boost in its recruitment efforts as well.

Fallout from Katrina
The code green initiative got its start nearly three years ago in the aftermath of Hurricane Katrina. After the storm, the uninsured population at Ochsner Medical Center soared from 4% to 11% of all patients. Staff at the medical center saw an immediate upsurge in patients and family members who were agitated and/or combative.

Ochsner addressed the problem by creating crisis prevention and intervention certification training. Staff who volunteered for the program received eight hours of classroom training that was partially taught by psychiatrists. They also engaged in role-playing exercises to help them deal with disruptive patients.

“The whole purpose of doing this was to avoid blowups, so it was a multilevel approach,” says Steven Deitelzweig, MD, director of the hospitalist program and vice president of medical affairs at the medical center.

The training process, which relies on nonviolent crisis intervention techniques from the Crisis Prevention Institute, gives team members scripted talking points to help them tell disruptive patients that the hospital doesn’t approve of their behavior. “That’s a very important point,” Dr. Deitelzweig says. “We say, ‘We don’t approve of this behavior and we won’t tolerate it here. We’re here to care for you, but you’re crossing the line.’ ”

One of the keys is early intervention and teaching staff how to spot signs that a patient may cause trouble. “A lot of times, you’ll have smaller physicians who feel limited in their response to these situations,” Dr. Deitelzweig says. “They very quickly find themselves on the wrong side of the patient’s bed, where they’re next to the window and there’s only one way out. There’s no reason for that.”

Moving as a team
When a staff member calls a code green, team members are paged overhead telling them to report to a certain floor. Typically within five minutes or so, the team meets in the hallway outside the patient’s room and decides who is going to do most of the talking. The entire team enters the room, and the lead member talks to the patient.

Dr. Deitelzweig says the team enters the room en masse to show the patient that the hospital means business. And just in case the patient gets physical, the team usually includes one or two large security officers. “They’re there just in case patients become so threatening that they can’t be talked down and need physical intervention,” he explains.

While the team will move patients who become too disruptive, Dr. Deitelzweig says that’s a last resort. “Avoidance is a much better tactic,” he explains. “We’ve really tried to augment communication skills through the program.”

Raising the threshold
While problems spiked after Katrina, Dr. Deitelzweig says there are fewer issues with disruptive patients, something he attributes to the program.

He recalls that initially, the threshold for calling a code green was a little low. “We would be calling them because staff were emotionally ill at ease,” Dr. Deitelzweig explains. A patient maybe wanted to go outside to smoke and was irritable, for instance, and a code was called.

“Now it really is used for appropriate patients,” he adds, “people who might truly induce bodily harm. I don’t see it called on elderly people who are just agitated. It’s really younger, more threatening persons.”

As evidence of the program’s impact, Dr. Deitelzweig says the code isn’t used very frequently. He personally hasn’t been on a code green for over a year and says that about only one code is called in any given month.

Dr. Deitelzweig suspects that even staff who don’t go through formal training are learning to handle disruptive patients by osmosis. “I suppose that if you call a code green,” he says, “you probably learn something just by watching the code team come in and handle the situation.”

A boost for recruitment
Looking back, Dr. Deitelzweig says that the code green initiative was relatively easy to implement. “It doesn’t require anybody acting as a change agent to get people to buy into the concept,” he explains.

Initially, the program was voluntary and designed for staff members from any part of the hospital. Most of the early interest came from nurses and residents, not physicians. “Residents are confronted with disruptive behavior a lot sooner than other staff because they’re on the front lines,” Dr. Deitelzweig says.

Today, some exposure to the program is mandatory for staff at all seven Ochsner hospitals, typically through a lecture. “Not everyone must be formally certified,” he explains, “but everyone gets exposed to some training.”

About 50 staff members of all types are team members, and they rotate on the team for a month at a time.

And while the code green initiative has helped the health system get a handle on disruptive behavior, it has provided some surprising fringe benefits.

Dr. Deitelzweig says that he was surprised to find that the program has given the health system’s recruiting efforts a boost. When staff, particularly nurses, hear about the program, they often give the idea of working at Ochsner serious consideration.

“No one wants to go to work and feel as if their existence is being threatened,” he explains.