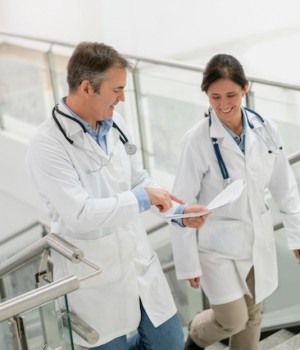 WHEN IT COMES TO hospitalist communication between shifts, the face-to-face handoff is considered the gold standard. But findings from a hospitalist-led study suggest that the face-to-face might be overrated, at least in terms of improving clinical outcomes.

The study, which appeared in the March issue of the Journal of Hospital Medicine, looked at 805 patients admitted during evening shifts at Mayo Clinic in Rochester, Minn. Researchers compared short-term outcomes of a group of patients whose handoff included a face-to-face conversation and a group whose handoffs didn’t include face-to-face communication because their hospitalists had staggered shift times.

This is an all-too-common situation for large hospitalist practices that use afternoon- and evening-admitting teams, which aren’t able to do a typical 7 p.m. or 7 a.m. face-to-face handoff. While most hospitalists at Mayo work either 7:45 a.m.-7:45 p.m. or 7:45 p.m.-7:45 a.m., some admitters work 2 p.m.-10 p.m. or 2 p.m.-midnight shifts. For admissions done in the evening until midnight, the admitting physician cannot hand off face-to-face to a colleague the next morning.

In the retrospective analysis, the authors found no differences between the two patient groups in terms of adverse events, RRT or code calls, transfers to higher levels of care, in-hospital mortality, length of stay, or 30-day readmissions. All patients in both groups were deemed low acuity and were admitted to general medicine units. The hospitalist group consists of 35 physicians and an equal number of nurse practitioners and physician assistants.

What surprised you about your results?
What we found was counterintuitive to what we expected. We realized that what we initially perceived as a problem might not actually be an issue, or that it might not be as big of a problem as we had expected.

We went into this thinking that we could come up with an intervention and fix the problem. But as we interviewed hospitalists, they told us, “We don’t really think this is a problem.” And these were hospitalists who work evening and day shifts, so they had experience on both sides.

So instead of just changing a process, we decided to look at clinical outcomes first. For our group, at least, the study raises the question of what the face-to-face really adds.

You looked at the 12-hour period after care was transferred to identify problems that might arise. Was that a big enough window?
We wondered about that too, and we analyzed up to 24 hours. We didn’t report those findings, but there wasn’t any difference between the 24and the 12-hour period in terms of the measures we looked at. The initial 12-hour period, which was before the next handoff of care occurred, minimized any confounders that a second handoff might have added to the analysis.

The face-to-face didn’t appear to confer a benefit in terms of better outcomes. Could that be due to the group’s existing communication standards?
In part because we’re such a large group, we tend to communicate fairly intensively anyway. We use not only chart notes, but e-mail and phone or pager calls.

We also have a homegrown handoff tool embedded in our electronic health record, and we expect hospitalists to use or at least update that tool when they go off shift. This tool automatically generates lists of patient demographics, medications, vitals and labs. Hospitalists can populate the tool with active diagnoses and a to-do list if they choose. The idea is to provide anticipatory guidance if, for example, a repeat test might be in order.

We also have an early-morning standardized handoff meeting that’s very succinct, and attendance is typically 100%. While we don’t use scripts or require hospitalists to follow a particular process, our communication is fairly extensive.

During our interviews with evening-shift hospitalists, several mentioned that they tend to e-mail the oncoming hospitalist about any concerns, or they wake up early to make a phone or pager call. So the general feeling among receiving hospitalists was that between the chart note and handoff tool, along with e-mail or phone calls as warranted, they were getting enough information.

Did the absence of a face-to-face handoff prompt some hospitalists to be more vigilant or quick to act on a concern?
We didn’t really see that in our chart reviews or hear that in our discussions with hospitalists. We used LOS as a proxy measurement to see if patients whose handoffs didn’t have face-to-face communication were in the hospital an extra half-day, for example, but we didn’t find any difference.

It also occurred to us that an interesting measure would have been patient experience. Did patients for whom there was no face-to-face handoff have to give the incoming hospitalist a lot of their history again? Looking at that factor might have strengthened our study.

Should results prompt a rethinking of the face-to-face handoff?
Several groups have reached out to us since we published this study. Their schedules and structures make it difficult or impossible for them to make a face-to-face happen, and they were reassured to read that outcomes were not affected. But you would really have to look at this within your own practice setting.

The response I’m getting from other hospitalists speaks to where we as a field need to start directing some of our transitions-of-care work going forward. If we believe that a face-to-face component is essential, we should determine what it actually adds, and then look at whether there are potential substitutes. It may be that some hospitalists and groups have ways of transmitting important information that might be just as robust as a face-to-face handoff.