It happens rarely, but when a pregnant patient ends up in intensive care, physicians are often thrown for a loop. To prepare hospitalists for that unlikely “but possible “scenario, Kim M. Kerr, MD, reviewed the major issues that arise when pregnant women end up in the ICU, either for obstetric emergencies like hypertensive disorders including preeclampsia or eclampsia, or for non-obstetric illness like heart disease, respiratory failure, complications of anesthesia or stroke.

“If an obstetric patient comes to the ICU, the mortality ranges between 8% and 20%,” said Dr. Kerr, associate clinical professor of medicine in the pulmonary and critical care division at the University of California, San Diego. “That’s pretty high in what was previously a young healthy female.”

What’s safe to use
According to Dr. Kerr, caring for these patients requires close cooperation between the critical care and the obstetrical teams. When a pregnant patient does arrive in the ICU, you are of course caring for two patients, the mother and the baby. The most important rule to keep in mind, said Dr. Kerr, is that “the best hope for the fetus to survive is for the mother to survive. The treatment of the mother is always the priority.”

This is particularly the case when deciding which drugs are safe to use. Most drugs fall into the FDA’s class C category, which means there are no human safety data. These drugs can and should be used if the potential benefit is thought to outweigh the risk. Only class X drugs, which include warfarin, should be avoided entirely.

Fortunately, many of the drugs used in ICUs are considered safe, including vasopressors and pain relievers such as morphine.

In general, Dr. Kerr added, most radiologic studies are safe, but should be ordered only if necessary. Hospitalists also need to anticipate some key differences on a normal chest radiograph of pregnant women.

“They always look like they are a little bit wet,” said Dr. Kerr. “The heart is larger because the left ventricle grows in size, and plasma volume is increased.”

A different normal
Other normal physiologic changes during pregnancy can be confusing. On pulmonary function tests, for example, it’s normal for a pregnant woman to have a lower expiratory reserve volume, residual volume and functional residual capacity.

Normal minute ventilation is increased by up to 50% at full term and is accomplished by an increase in tidal volume, not respiratory rate. Tachypnea, on the other hand, is not a normal finding in pregnancy, so physicians should investigate its etiology.

The normal PaCO2 value for a pregnant woman is 28 to 32 mmHg. “If somebody brings you an asthmatic and the PaCO2 is 36 or 38,” Dr. Kerr explained, “you should be more concerned than you would be in a non-pregnant person.”

Cardiac considerations
The fact that total blood and plasma volumes increase during pregnancy contributes to a total body fluid expansion of between six and eight liters. To accommodate these changes, the left ventricular compliance and end-diastolic volume increase without any change in central venous or pulmonary artery occlusion pressure.

Because cardiac output increases by 30% to 50% “during labor, it can increase up to 80% “problems can occur “if there is underlying cardiac disease,” Dr. Kerr said.

While cardiac arrest is very rare “it happens in only one out of every 30,000 pregnancies “Dr. Kerr has witnessed one. The most common causes are venous thromboembolism, pregnancy-induced hypertension, sepsis, hemorrhage, trauma and pre-existing heart disease.

Resuscitation is generally the same as with non-pregnant patients, but it’s a good idea to put a wedge under the right hip or manually displace the uterus to the left while doing CPR. If the fetus is old enough “generally about 24 weeks “and resuscitation efforts are not successful, try to deliver the baby within five minutes of arrest. “There have been cases where delivery of the fetus has facilitated successful resuscitation of the mother,” Dr. Kerr said.

These patients are also at a higher risk of aspiration, and they desaturate more quickly due to reduced functional residual capacity and increased oxygen consumption.

Underlying cardiac disease complicates about 4% of pregnancies and is a substantial cause of mortality in pregnant women who are admitted to the ICU. Cardiac illnesses of pregnancy include peripartum cardiomyopathy, when heart failure develops in the last month of pregnancy or up to five months after delivery.

Treatment is generally the same as for other heart failure patients. Half of these women will get better after delivery, Dr. Kerr said, but the prognosis is poor for those who do not improve.

Other diagnoses
One of the most devastating diseases in pregnant women is amniotic fluid embolism (AFE). The condition, which has a mortality rate of between 60% and 80%, causes 10% of maternal deaths in the U.S. Treatment is limited to supportive care, and the majority of survivors have significant neurologic deficits.

Hypertensive emergencies “preeclampsia and eclampsia “are the most common complications of pregnancy, and many are taken care of by obstetricians alone. Eclampsia should be considered in any woman of child-bearing age who presents with new onset seizure. However, “the most common cause of seizure in a pregnant patient is an underlying seizure disorder,” Dr. Kerr said, not eclampsia.

And with more women receiving fertility treatment, Dr. Kerr said, hospitalists should be prepared to see women suffering from ovarian hyperstimulation syndrome, characterized by acute third spacing of fluid and ovarian enlargement. Although the condition tends to be mild, it can be severe in up to 5% of stimulated ovarian cycles, causing circulatory dysfunction with accumulation of significant ascites and pleural effusions. Treatment is supportive, and most women are discharged from the hospital in seven or eight days.

“The really good news is that most pregnancies go just fine,” said Dr. Kerr, “and you never have to see any of these patients.” 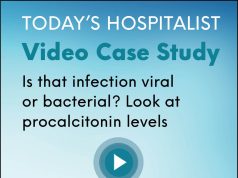