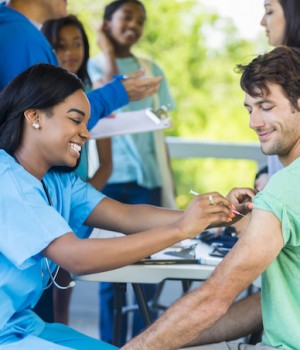 HOSPITALISTS WHO wouldn’t dream of wittingly exposing patients to serious illness are potentially doing just that when they don’t bother to get an annual influenza vaccination. That’s the take-home message of a growing body of professional societies and of the Joint Commission.

“It’s a patient safety issue, but for the most part influenza vaccination remains voluntary,” says infectious diseases specialist William Schaffner, MD, chair of the department of preventive medicine at Vanderbilt University School of Medicine in Nashville. Dr. Schaffner is a consultant for the Flu Vaccination Challenge, an initiative from the Joint Commission Resources, which is the nonprofit arm of the accrediting body.

The fact that getting a yearly flu shot (or nasal vaccine) is voluntary probably explains why vaccination rates are woefully low among health care personnel. Fewer than half reported receiving the vaccine in 2008, the first year of the commission’s campaign.

The objective of the initiative this year is to push the target rate of vaccinations within hospitals to 75%, up from the 2008 challenge target of only 43%. In 2009-10, 85% of the institutions participating in the challenge posted facility-wide vaccination rates of 65% or higher.

But Dr. Schaffner points to another trend: a move within a growing number of hospitals and a call from professional societies to quit fooling around and make vaccination mandatory for health care personnel. An estimated 10% of organizations treating inpatients, including HCA-Hospital Corporation of America, now have mandatory vaccination policies. Within HCA facilities, the vaccination rate is now 98%. (In 2009, New York became the first state to require health care workers to be immunized.)

This year, both the American Academy of Pediatrics and the Infectious Diseases Society of America endorsed mandatory yearly immunizations for health care workers. And a revised position paper from the Society for Healthcare Epidemiology of America (SHEA) published in August takes this hard line: Vaccination should be a requirement for both hospital employment and hospital privilegesÃ¢â‚¬”and “noncompliance should not be tolerated.”

Myths and personal preferences
Why is it so challenging to convince doctors and nurses to be vaccinated? According to Dr. Schaffner, reasons run the gamut, as do misconceptions.

Many nurses mistakenly believe, for instance, that individuals can contract the flu from the vaccine, although Dr. Schaffner says that research has long disproved that notion. Among physicians, the chief misperception is that flu vaccine is ineffective. Physicians also frequently have the mentality that they are “tough enough”Ã¢â‚¬”by virtue of stamina and prior exposureÃ¢â‚¬” to weather any flu bug.

“The physicians who are young and healthy and have never experienced severe influenza say, ‘I don’t need to be immunized. I can get through the winter perfectly fine,’ ” Dr. Schaffner says. Hospitalists, by virtue of the fact that they’re young, may be particularly susceptible to that myth.

Older physicians, he adds, were mistakenly informed that any vaccine received in October wouldn’t still confer immunity in February, which is peak flu season in some parts of the country. “What we know now,” says Dr. Schaffner, “is that immune memory lasts a lot longer than we thought.”

Then there’s the fact that a good number of physicians and nurses don’t like needles. “A lot more health care workers are needle-averse than you might expect,” Dr. Schaffner says. Studies find that as many as 15% to 30% shy away from needles, and that up to one-third of housestaff in one study didn’t receive the vaccine because it was inconvenient or they “forgot.”

Then there’s this misconception that’s downright dangerous: If physicians just stay home sick when they have flu symptoms, patients will be protected. In fact, Dr. Schaffner points out, people are contagious a full day before they’re symptomatic, so health care workers can transmit disease even when they feel fine.

Emphasizing convenience
To combat these misperceptions, hospitals are moving beyond ask-and-maybe-they’ll-do-it tactics to more assertive strategies.

To increase vaccination rates, Dr. Schaffner says that buy-in has to start at the top with hospital administrators, who need to stress vaccination as a professional and patient safety obligation. (The SHEA position paper explicitly recommends “having leaders at the highest level, rather than midlevel managers, set policy regarding employee vaccination” to overcome staff resistance.) Education helps, Dr. Schaffner adds, as do competitions among departments with awards, such as pizza parties.

He believes that increasing vaccination rates may be tougher in large hospitals because of their sheer size. Vanderbilt, for instance, with 23,000 workers in its medical center, is making a multi-pronged effort. The occupational medicine department offers “anytime, anywhere” access and staffs a prominent tent in the center’s plaza. That department is also taking the vaccine to the wards on nights and weekends.

Vanderbilt has taken the additional step of offering vaccine to anyone who shows up in occupational health “for the proverbial sprained ankle,” Dr. Schaffner says. “You have to try many approaches.”

The power of collaboration
Other institutions are turning to collaboratives and working with other hospitals in their markets. The goal is not only to find out what works, but to make vaccination campaigns more visible by being city-wide.

That’s a tack being planned in Memphis, according to B. Keith English, MD, chief of the pediatric infectious diseases division at Le Bonheur Children’s Hospital in Memphis and professor of pediatrics at the University of Tennessee Health Science Center.

He now plans to work with the Memphis Quality Initiative, an area collaborative of hospital administrators and medical personnel that previously worked together to improve hand hygiene rates city-wide and create smoke-free hospitals. The goal will be to improve flu vaccination rates for health care personnel throughout the Memphis area.

“It doesn’t really make sense,” he says, “to have an effort at one hospital and not the others. That also puts pressure on personnel in each facility to post better vaccination rates than their competitors. ”

At Le Bonheur, the issue of vaccinating health care workers has been particularly relevant since the hospital in 2009 was “very hard hit” by H1N1, says Dr. English. (Le Bonheur was the first site to receive H1N1 vaccine from the CDC last year when it became commercially available.) Even before that, he says, the hospital had instituted a policy that all workers either needed to be vaccinated or had to fill out a declination form explaining why they won’t be immunized.

Some “tiny number of people,” Dr. English notes, do have an allergy to eggs or a history of a previous allergic or severe adverse reaction to influenza vaccine, which are medical contraindications to influenza immunization. (Some experts also consider a history of Guillain Barre syndrome to be a contraindication.) To boost immunization rates at his hospital, he says, the facility sponsors conferences on immunization and goes out of its way to make sure personnel know that vaccine is available, using everything from hall posters to computer pop-ups.

“We’re doing well on that, but education alone just really is not enough,” Dr. English notes. “The answer is going to have to be some sort of requirement.”

Taking a hard line
Some health care workers chafe at the prospect of mandatory anything, Dr. English admits, particularly physicians. “We like being free agents,” he says, “but we already have a number of requirements that we need to successfully complete to practice medicine.” One, he notes, is getting a skin test for tuberculosis.

But even mandating vaccination “isn’t the end of the road,” Dr. English adds. What exemptions, for instance, should hospitals allow? In addition to medical contraindications, most hospitals with mandatory immunization policies allow religious exemptions, while some allow other “philosophical” exemptions.

Then there’s the issue of what to do with people who don’t get vaccinated. Some hospitals require all unvaccinated workers to wear surgical masks when they’re within six feet of any patient throughout the entire flu season. Dr. English says that his hospital is considering that approach as it moves (perhaps next year) to a mandatory vaccination policy.

The revised SHEA position paper reports anecdotal evidence that vaccination rates go up considerably in hospitals that require masks for unvaccinated personnel. The SHEA paper also points to hospitals that have fired employees who refused to be vaccinated.

The same position paper also proposes going public with facility immunization rates as a way to put even more pressure on hospitals. Such recommendations, Dr. English says, are just one more indication that momentum toward mandatory vaccination for health care workers is growing.