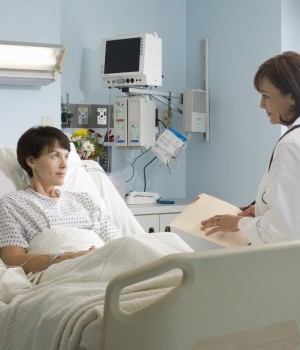 Published in the February 2005 issue of Today’s Hospitalist

In 1998, when St. Joseph Hospital noticed that its ICU was seeing an above-average number of cases of ventilator-associated pneumonia (VAP) among its adult patients, officials were a little puzzled.

The hospital, after all, had kept up with the latest evidence to prevent VAP. Its ICU had implemented several strategies to stamp out VAP, from elevating the heads of ventilator patients’ beds to encouraging good hand hygiene.

The numbers don’t lie, however, and officials at the 235- bed Catholic hospital in Augusta, Ga., realized that their efforts to embrace cutting-edge evidence had not gone far enough. So in what can be considered a best-practice makeover, the hospital’s clinicians made some key changes in how they put clinical evidence into practice to prevent VAP.

In some cases, the hospital had to simply fine-tune practices that had already been implemented, like boosting the number of cuff pressure monitors. In other instances, St. Joseph introduced new technologies, such as subglottic suction in tracheal tubes.

While many of the changes were incremental, the combination of tweaking existing therapies and adding new strategies quickly slashed the rate of VAP in St. Joseph’s ICU. The strategy was so effective, in fact, that the hospital has since applied a similar model to reduce DVTs and other problems in the ICU.

When St. Joseph first began tracking VAP in its medical-surgical ICU, its baseline infection rate was 24.1. The national average at that time, by comparison, was 11.6.

Hospital officials quickly realized that to bring St. Joseph’s VAP rate into line with the national average, they would have to reach out to a wide group of clinicians. One step was to create a multidisciplinary team made up of intensivists and pulmonologists, intensive care nurses, clinical specialists, and representatives from infection control, lab, pharmacy and cardiopulmonary-vascular services.

Creating the team, however, was just the start. When questions were raised about the validity of the hospital’s infection rates, the infection control department knew it needed to assure physicians that it wasn’t using a definition of VAP that was too broad. It wanted to assure physicians that a patient who entered the hospital with pneumonia, for example, would not be counted as a new case of VAP.

To nip those concerns in the bud, infection control staff worked with physicians to determine when a case of pneumonia was in fact VAP. That helped convince physicians that the hospital’s VAP statistics were valid.

“The medical director wanted a consultation between the infection control person and either him or the intensivist to say that this is truly a case of VAP,” recalls Debbie Keith RN, MS, director of ambulatory services. “They would talk about it, agree that it was a case of VAP, and move on.”

Once physicians were on board, project leaders could focus on making changes at the ground level. The team began by reviewing the most recent CDC guidelines for treating patients on ventilators. It then took the all-important step of examining how nurses and other clinicians were doing when it came to complying with best practices.

Ms. Keith says the team quickly realized that the problem wasn’t that best practices weren’t being followed, but that they weren’t being used as consistently as possible.

“We found that we needed to evaluate best practices and look at all the things that need to be done to prevent VAPs,” she explains. “As we went through each of those, we found opportunities in each area to do things better. Maybe we had the policy in place, but we weren’t as diligent as we needed to be when it came to areas like cuff pressure.”

Elaine Comeau, RN, MS, vice president of clinical operations at St. Joseph, says that in a busy ICU, staff are going to take shortcuts from time to time. “Somebody may skip a step and maybe the head of the bed isn’t really elevated 30 degrees, maybe it’s only 20,” she explains. “So we focused on going back and reinforcing the different parts of best practice and making sure that everybody was following all aspects of best practice.”

To determine how well clinicians in the ICU were doing when it came to following best practices to prevent VAP, the quality improvement team tried a novel approach: It asked nurses and other clinicians to rate how well they were following VAP-prevention strategies like elevating the heads of ventilator patients’ beds.

Ms. Keith says that when the team checked the clinicians’ responses through direct observation and chart reviews, it found that nurses and other clinicians’ were fairly accurate in assessing their strengths and weaknesses. As a result, the team decided to proceed by focusing on several of the VAP-prevention strategies that the clinical staff said needed improvement.

“¢ Hand hygiene. “Staff were not as comfortable with hand-cleaning practices with ventilator patients,” Ms. Keith says. “We thought there might be some opportunities there.”

One solution? The hospital installed bedside hand-gel dispensers with a formula containing 4 percent chlorhexidine gluconate. It also posted bedside signs reminding clinicians to clean their hands with the solution before touching or manipulating ventilator tubes.

Ms. Comeau is quick to give most of the credit for the project’s success to the staff. “This project was developed and implemented by staff working as a team,” she says. “They did all the work, put in the new protocols and made sure that everyone was following the protocols, and they deserve all the credit.”

While the quality improvement project formally wrapped up in 2002, St. Joseph has continued to keep its VAP rate low. In 2003, for example, the ICU treated just one case of VAP. In 2004, it treated just two cases of the condition.

To hold onto those gains, St. Joseph has continued to watch the literature for new strategies to prevent VAP. ICU staff, for example, moved to anti-bacterial mouth cleansing solution, and nurses now brush the teeth of ventilator patients instead of using a swab.

And in patients who have a particularly high risk of developing VAP, the ICU has begun using a specialty bed that rotates from side to side for much of the day. Ms. Keith says the technique helps reduce VAP by mobilizing secretions.

What’s next for St. Joseph’s VAP prevention efforts? Ms. Comeau says that the hospital is examining ways to increase the pH of gastric secretions, a technique that has been shown to reduce VAP. The ICU is also experimenting with giving patients a break from sedation in an attempt to extubate them earlier.

The hospital was so impressed with the project’s results that it has already used a similar quality improvement model to reduce central line infections and DVTs in the ICU. Ms. Comeau says the hospital is planning to use the model to target sepsis and urinary tract infections.